All Stringrs need to know the basics of videography. This week, we expanded upon our Video Lingo to Know page: we’ve listed and defined shooting terms as a quick reference for Stringrs to look up technical vocabulary that professional videographers use everyday.

Ambient: the environmental conditions, for example: surrounding light and sound.

Audio: sound. Specifically, the range of frequencies which are perceptible by the human ear.

Aspect Ratio: the proportion between the width and the height of a picture. It is often expressed in the W:H format, where W is the width and H the height. For example, a 16:9 aspect ratio means that for a width of 16 units, the height must be 9 units.

Beta: A pre-release version of computer software. It is often distributed widely without charge in order to obtain feedback, identify bugs, and attract customers.

B-Roll: supplementary material used in broadcast. It can include different shots of a building (exterior and interior), street view, etc.

Compression: video is typically filmed with 24 or 30 frames per second. That means that every second, 24 or 30 still images are displayed to give the illusion of movement. Because the images are so closely linked, not everything in the image moves from frame to frame. Compression stores the changes in the frames as opposed to storing entire frames.

Converting: changing the format of a video file. For example, to transfer a movie or a clip to a different file type for viewing on a mobile device, uploading to the Internet, or compressing to save hard drive space.

Depth of Field: the zone between the nearest and furthest points at which the camera can obtain a sharp focus.

Exposure : the amount of light which is passed through the iris, and which the CCD or film is exposed to.

Evergreen: Footage that is not “newsy” can be used over and over again. Examples include  exterior footage of government agencies, people enjoying a beach on a hot summer day, and weather occurrences like heavy winds and rain.

Framing: look for horizontal and vertical lines in the frame (e.g. the horizon, poles, etc). Make sure the horizontals are level, and the verticals are straight up and down.

Lens: an optical lens or assembly of lenses used in conjunction with a camera body and mechanism to make images of objects either on photographic film or on other media capable of storing an image chemically or electronically. Lens types:

Metadata: data that describes other data. Meta is a prefix that in most information technology usages means “an underlying definition or description.” Metadata summarizes basic information about data, which can make finding and working with particular instances of data easier.

Pan: the framing moves left & right, with no vertical movement.

Raw Footage: the original unedited footage that is captured while shooting. It can also be called source video.

Tilt: The framing moves up & down, with no horizontal movement.

Tripod: a portable three-legged frame, used as a platform for supporting the weight and maintaining the stability of some other object. 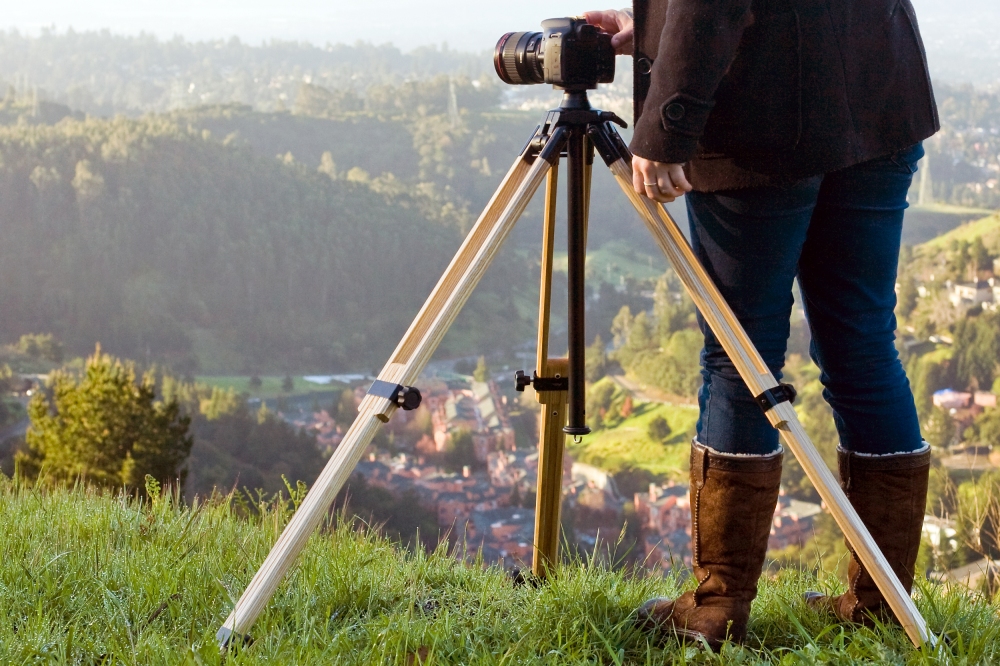 Sequence: a series of shots on the same subject that are edited together to tell a story. A well-edited video sequence adds visual variety to video storytelling.

Shutter: a device that opens and closes to expose the film in a camera.

SOT: also known as Sound on Tape, it refers to room tone.

VO: Voice-Over is a TV news story during which a news anchor or reporter reads a script live as video is played up to a place when a news maker video/audio sound bite is played. At the end of the SOT, the reporter or anchor resumes reading with or without additional video.

Zoom: in & out, appearing as if the camera is moving closer to or further away from the subject. When a shot zooms in closer to the subject, it is said to be getting a “tighter shot”. As the shot zooms out, it does the opposite.